Laughing on the Outside - Book Review 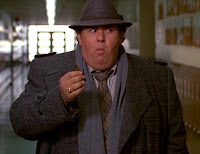 This book is the biography of the Canadian comedian and actor, John Candy. It describes how he grew up in Toronto, and worked hard at being the class clown. John attended Neil McNeil Catholic High School on Victoria Park Avenue, between Kingston Road and Queen street and not far from the Beaches area. John's father Sidney died of a heart attack when John was just 5 years old. So John grew up in a single parent family with one older brother James.

In the 1970's John graduated from High school and started working as a comedian. He won a few small bit parts in movies, but his real fame began when he won a spot on the cast of the SCTV. From there, he moved to Chicago, and then to Pasadena in Los Angeles. Eventually he was offered a role in the movie Splash which finally gained John the fame he had been hungering for.

John had the need to always please people so he found it very very hard to say NO. This is one reason why his movie career never rose much above the B-line. He could never say no to movies being written or produced by his friends. Most of these movies bombed at the box office.

Another reason John never said no was because he had an urge to always been working. He spent many weeks and months away from his wife Rose and his children (Jennifer and Christopher). When he completed a project, he would soon feel as if he was bored and would hunt around looking for something else (anything else) to do.

The third thing that John would do when he was bored was to eat, drink and generally pig out on junk food.

One other thing - John was a part owner of the Toronto Argonauts (Argos) football team during the early 1990's. His movie career declined during this time, because he spent so much time in Toronto, looking after his football team. One of the last movies John ever made was Cool Runnings (1993).

John died of a heart attack in Mexico while filming Wagons East in March 1994. John was just 43 years old. He weighed over 300 pounds. His alma mater (Neil McHeil High School) in Toronto named their Visual Arts Studio in his honour after his death.

Of all John's movies, I personally though that Cool Runnings was the best and the funniest. He was good in Splash, Home Alone and Uncle Buck, and I didnt really like Planes Trains & Automobiles very much. I don't think I have seen any of his other movies.

I found this book to be very good. It describes John's personality in detail. It also explains the reasons why John made the decisions that he made, and how those decisions affected his career.

I read this book for the 2nd Canadian Challenge, and for the In their Shoes (Memoirs) Challenge.
Posted by Francesca Thomas at 4:44 p.m.

Apart from those great sketches he performed on SCTV, what I remember most about this great Canadian comedian was his instantly recognisable voice and that infectious laugh of his. Though ‘Stripes’ and ‘Going Berserk’ are the movies my Husband would likely say were his best, I loved John Candy as the voice of Wilbur, that goofy Albatross from The Rescuers Down Under.