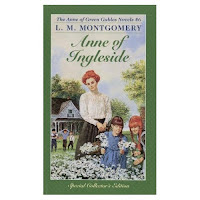 This is the story of Anne's family during the early 1900s. Anne has 5 children and is about to give birth to her 6th child.


So the family at the beginning of the book is (according to the chronology)
James (Jem) aged 7,
Walter (the sensitive one) aged 6,
the twins Nan and Diana aged 4,
and Shirley aged 2. Shirley is a boy - not a girl.
The last child is Bertha Marilla Blythe (Rilla) who is born shortly after the start of the book.

Also part of the family is Susan the cook - who has been with the family since before Jem was born.

In the first two chapters Anne is back in Avonlea after attending Gilbert's fathers funeral. Gilbert went back to Ingleside after the funeral (because being a doctor, he has patients he cannot leave for long) and he must see to the children as well. Anne stays a few extra days to see Marilla, Rachel Lynde and Diana.

The rest of the book is about the kids. Most of the children are developed over 6 years, and learn interesting life lessons.

Jem the eldest wants a dog. So he gets on, and eventually the dog dies. So he gets another dog which unfortunately pines away for its previous owner. Jem vows to never have another dog.

Walter writes poetry. He gets teased a lot by the neighbour children because he reads and writes a lot.

Diana is very naive. She makes best friends with any girl who tells marvelous stories and tends to beleive all the stories. One girl told her stories about her family, and Diana beleived every word until the day when Diana went to visit her friend at home and discovered that the house was not a mansion, but intsead was just an old falling down cottage.

Diana makes friends with another girl, Delilah, who starts telling Diana stories about her aunts and uncles having lots of adventures and how her stepmother beats her and how she is forced to work as a slave and clean the house and how she must eat with the servants, and cannot have any sugar on her porridge and she tells Diana she is a martyr.

You know Susan, she had an uncle who committed suicide twice. Diana tells Susan. (that one made me laugh)

One weekend Anne and Gilbert are both away and Susan is looking after the children. Delilah invites herself to Ingleside and spends the night there. In school the following Monday, Diana overhears Delilah telling fibs about the Blythes and about the house, and learns a hard lesson. Not to beleive everything you hear. She has had to learn that lesson twice.

Nan is also gullible. She gives her new red parasol away to Dovie Johnson, a girl who said she knew a secret about Nan and demanded the parasol as payment. When Nan gives her the parasol and demands to know the secret, She is told that she is not really the Blythes child. She has brown hair while her twin Diana has red hair. Cassy Thomas from the harbour has red hair. She is the real Blythe, not Nan.

Nan is devasted and goes to see Cassie Thomas and ask her about this. But when she finds Cassy's house, Cassy is out, so Nan speaks to Cassy's mother. It turns out that Cassie was a year older than Nan and that Nan looks just like Gilbert's mother. Nan also learns that she is very green to beleive a silly tale like that.

The cutest child in the family is Rilla, the baby. By age 5 she has a lisp. There is one funny story about Rilla at the end of the book. Susan asks her to take a cake to the local church for a function. Susan explains that the function is to raise money for children who dont have any mothers and fathers.

I'm the next thing to an orphan. I've only got one father and mother. says Rilla.

Rilla does NOT want to be seen carrying a cake through the town. She just knows she will be laughed at. That is what servants are for - to carry the cakes. She tries everything she can think of to prevent her being forced to carry the cake. So she prays to God. [This is a bit of snobbery in the girls - but that seems to be normal for those times].

Rilla gets desperate and tells Susan My doll hath been tooken ill. I mutht put her to bed and thtay with her. Maybe its ammonia. (another giggle here)

Nothing works so Rilla puts on her best sunday dres and shoes and heads off to town. On the way there, she meets up with the sunday school teacher. Heavens, this will not do for Rilla to be seen by the sunday school teacher carrying a cake. So Rilla throws the cake over the bridge rails and into the river. Shortly after she meets up with the teacher and discovers that the teacher is carrying a cake as well. Rilla is cross that she threw away an opportunity to be seen walking through town with the teacher, both carrying cakes.

There a few chapters about the Ladies aid and they sit around quilting and gossiping. I skipped those chapters. Anne was not part of that circle. I felt that those chapters were not really helping to move the story along.

The book starts with Anne and must end with Anne as well. So then we get a few chapters of Anne being run down, and feeling like maybe Gilbert does not love her anymore. He seems to be taking her for granted. Then a letter comes that invites Anne and Gilbert to a party which Christine Stuart will be attending. Christine Stuart was the young lady stepping out with Gilbert back in College after Anne turned down his proposal. (see Anne of the Island). Gilbert forgets to give her a gift on their fifteenth wedding anniversary - so Anne chooses to not give him his gift either. At the party Christine flirts with Gilbert and then takes him into the garden and keeps talking.

After the party when they get home, Gilbert makes a telephone call and then bounds up the stairs to hug Anne and says happy anniversary. It turns out that Gilbert has only been thinkling about a very sick patient, and totally was not listening to everything Christine said in the garden. His gift from Toronto arrived late (on the day of the anniversary while they were at the party) which is why he couldnt give it to her that morning.

You do still love me Gilbert? I'm not just a habit with you? You havent said you love me for so long. Anne asks anxiously.

My dear dear love! I didn't think you needed words to know that. I couldn't live without you. Always you give me strength."

They plan a trip to Europe for a second honeymoon.

I didn't realize that Anne's story continued after Anne of Green Gables. It must be fun to revisit our favorite character in that book.