This is the story of the grassroots environmental movement that began in the 1960s and rose to become one of the most important environmental groups in the USA. It is called River Keeper. The Riverkeeper's job is to look after and protect the Hudson River from pollution, and to keep the fish safe and edible. 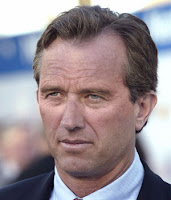 Robert Francis Kennedy Jr was 14 years old when his father was assassinated in 1968. In 1983, Kennedy was arrested in Rapid City South Dakota Airport for heroin possession. Upon entering a plea of guilty, Kennedy, then 29 years old, was sentenced to two years probation, periodic tests for drug use, treatment by joining Narcotics Anonymous, and 1,500 hours of community service by Presiding Judge Marshall P. Young.

In 1984, Kennedy joined the Riverkeeper organization to satisfy the 1,500 hours community service to which he was sentenced. He worked with the group to sue alleged polluters of the Hudson River. After his 1,500 hours were complete, the group hired Kennedy as its chief prosecuting attorney. Riverkeeper was founded in 1966 by a group of fishermen and residents from New York.

Kennedy also founded, and is the current chairman of, the umbrella organization, Waterkeeper Alliance, which connects and supports local waterkeeper groups. Today there are 180 waterkeeper programs worldwide operating under the trademarked Riverkeeper, Lakekeeper, Baykeeper, or Coastkeeper names.

Since 1987 Kennedy has served as a Clinical Professor of Environmental Law and co-director of the Pace Environmental Litigation Clinic at Pace University School of Law. The clinic allows second and third year law students to try cases against alleged Hudson River polluters. Kennedy also serves as a senior attorney for the Natural Resources Defense Council, a non-profit organization based in New York which works to expand environmental laws and restrict land use. [Source - Wikipedia]

This Book was co authored by Kennedy and John Cohen. Cohen was the first full time Riverkeeper on the Hudson River in the 1980s. This book is about how the Riverkeeper program started and how it was built up. The only way to keep the environment safe for the people is to start at the grass roots level with the people. Too often over the last 50 years the US Congress have bowed to big business demands for less strict environmental rules and the Riverkeepers have fought back.
Posted by Francesca Thomas at 10:44 p.m.

OOPS sorry. I have changed John's name to Cronin.

Well I will update John's name as soon as Blogger will alow me. Looks like a problem.