Shocking news on Robert Munsch's website. Dated August 28th, 2008, and it says this.
I have had a stroke. It affects my ability to construct sentences. It is a part of my brain called Broca's Area. It is going to take a long time to get well.
I emailed the website asking for more details and received this reply.
Bob suffered a minor stroke in late August. Although a full recovery is expected, he is taking some time off. 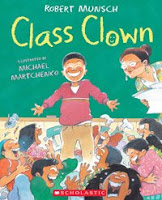 As Leonardo grew up, everyone thought he was cute because he was so funny.
Leonardo, everyone kept saying, You are sooooo funny.


By the time he was in grade 1 he was called the class clown. Now the grade one teacher that year was Mrs Gomez. And Mrs Gomez said, Leonardo, You have to stop. The kids are laughing all the time and noone is learning anything. STOP BEING FUNNY.

Ok said Leonardo and for the first time in his life he stopped being funny.

Within 5 minutes Leonardo couldn't help it. He just had to be funny. So he made a funny face at the girl sitting next to him. She fell off her chair and on the floor laughing.

Mrs Gomez asked the girl what she was doing.
I was thinking of something very funny said the girl.
Well STOP thinking, said Mrs Gomez.
Ok, I'll stop thinking, the girl said as she kept on lauging.

A few minutes later Leonard had the urge to be funny again. So he leaned over to the boy sitting next to him on the other side, and told a very funny joke. The boy started laughing and fell out of his chair onto the floor. Mrs Gomez came over.

Leonardo was quiet until after lunch, and then while Mrs Gomez was writing on the backboard, Leonardo drew a very funny picture and held it up so that everyone in the class could see it. They all burst out laughing.

STOP yelled Mrs Gomez. What is going on?
It's Leonardo. He's the class clown. The children gasped as they laughed.
Leonardo said Mrs Gomez, I have told you to stop being a clown. now I am getting really really REALLY mad.
Ok said Leonardo. I will never be funny again.
HA said Mrs Gomez and she fell down and laughed so hard she kicked her desk over.
Leonardo she said. You are SOOOOOOOOOOO FUNNY.

That was when Leornardo decided that when he grew up, he was going to be a clown.
Posted by Francesca Thomas at 9:56 p.m.

I hadn't heard that news. Sad. I really hope he recovers with full function.